In a previous case report, I showed you what happens when someone who is underweight gains thirty pounds.

In this new case report, I’ll show you what happens when someone who is overweight loses thirty pounds.

This is the case of a thirty-year-old female who lost thirty pounds and improved every aspect of her health in the process. She has given me permission to share this report.

When we started working together, she weighed 194 pounds at a height of five feet and three inches. Her blood pressure was 119/88 with a resting heart rate of 72.

Her life-long nutrition practices were to eat and drink without restriction. For exercise, she engaged in occasional recreational walking, hiking, and kayaking, and manual labor on her property.

Interpretation of labs: A fasting glucose of 93, although considered normal by the lab, is higher than what you might expect for someone in excellent metabolic health. Instead, you would prefer to see this in the mid-eighties or lower.

Hemoglobin A1C is a measurement of red blood cell glycation which represents roughly a three-month running average of blood glucose levels. An A1c of 5.5% corresponds to an average blood glucose of 111. This is considered normal by medical guidelines. Most labs consider 5.7% to be the cutoff for “pre-diabetes,” and 6.5% to be the cutoff for diabetes.

However, longevity experts agree that lower average blood glucose levels are likely beneficial. Some research has demonstrated an inflection point in the risk of type two diabetes at an average glucose of 87. But average glucose isn’t all that matters. Peak glucose may be more important with regard to chronic disease risk. For more discussion of the importance of glycemic control, I can’t recommend enough listening to this podcast by Peter Attia, MD.

CRP or C-reactive protein is a protein which increases in the blood stream in response to any sort of inflammation or infection. It’s sometimes used as a marker of cardiovascular and metabolic health. In the absence of other acute medical problems, an elevated CRP suggests systemic inflammation as a result of poor metabolic health. My client’s CRP was mildly elevated.

ALT (alanine aminotransferase) is an enzyme found primarily within liver cells. In people with hepatic steatosis (fatty-liver), ALT will often be elevated. Normal is usually considered to be less than 40, but 20 is probably a healthier cutoff. People with excellent metabolic health often have blood ALT levels far below this. My patient’s initial ALT was 26, suggesting (although not proving) possible fatty-liver.

HDL-C (high-density-lipoprotein cholesterol) – this is a measurement of the amount of cholesterol trafficked as part of HDL particles. In patients with energy surplus and poor metabolic health, this number is usually lower than in patients with excellent metabolic health. Though poorly understood, most people believe HDL particles are a requisite part of reverse cholesterol transport — an important and arguably cardioprotective process. My client’s HDL-C, though not extremely low, was only 39. This needs to be interpreted within the context of the rest of the lipid panel, which I’ve not pictured nor discussed here.

Overall, I believe my client’s initial blood work represented suboptimal metabolic health. I explained to her that an improvement in nutrition and energy balance would likely improve all of these markers, and as a result, decrease the risk of developing chronic diseases like cancer, diabetes, hypertension, cardiovascular disease, and dementia.

In addition to the lab analysis, we also conducted a baseline analysis of her nutrition. We used Cronometer to track her daily diet for two weeks before making any changes. 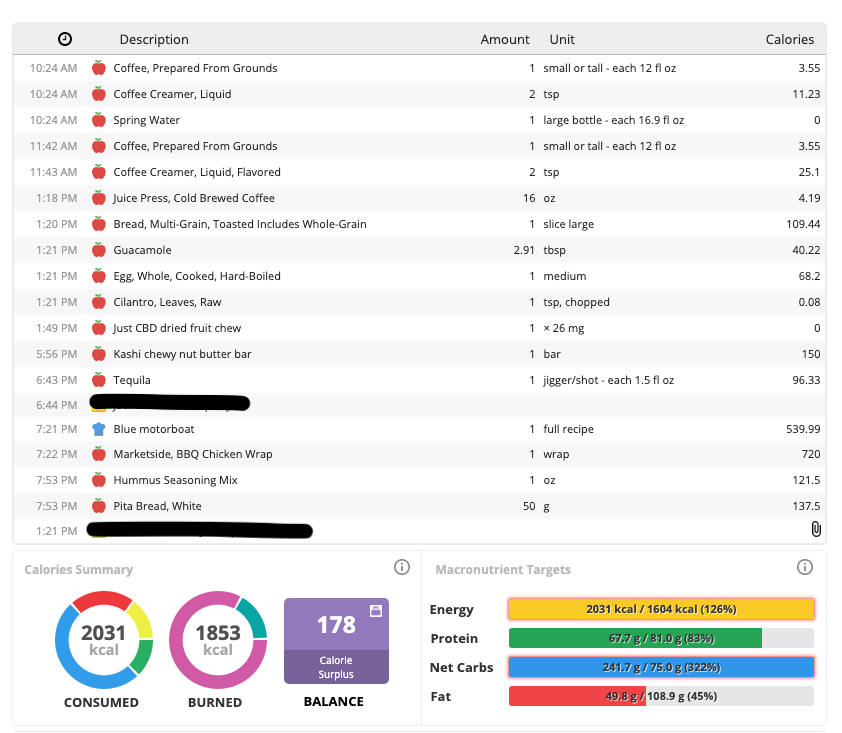 Based on estimates of BMR, my client was in a net daily energy surplus.

Can you lose weight by simply reducing calorie intake below calorie expenditure?

Yes, but it’s not quite that simple. Different foods affect our metabolism differently. Here are just a few variables that must be considered when changing your diet to decrease energy (caloric) intake:

Practically speaking, a diet that is comprised of mixed meals (an uncontrolled ratio of fat, carbohydrate, and protein) typically facilitates the highest energy consumption and the lowest energy expenditure, whereas a diet that is limited to mostly fat or mostly protein alone is typically more satiating and tends to lead to lower energy intake. What’s more, in people who are overweight or obese, a less energy dense diet unexpectedly increases satiety, decreases cravings, and increases movement and therefore energy expenditure.

Consider how much energy you would consume if given unlimited steak versus a meal of unlimited rolls, steak, potatoes, and ice cream.

The point is, if you eat almost exclusively whole foods and focus primarily on one or two macronutrients for the majority of your diet, it will be hard not to lose weight if you’ve got weight to lose.

There are a few natural whole foods that are particularly energy dense that I advise my clients to avoid when they are trying to lose weight: nuts and fruit top the list. But, there is a gradation here as well. Whole fruits and un-shelled nuts are much harder to overeat than a more processed version of the same food. Think about how many peanuts you can eat if you are given peanuts in the shell versus peanuts that have been shelled versus peanut butter. Consider an orange that you have to peel versus orange juice. Consider strawberries versus jam or jelly.

Also consider that foods taken straight from nature in their whole form as opposed to foods that have been heavily processed tend to be simple in terms of their macronutrient ratios and flavors. As a result, whole foods are typically less rewarding to eat than processed foods. Many books have been written explaining how food manufacturers hire scientists to make foods hyperpalatable.

Nearly any diet that focuses on whole foods and minimizes one or two of the macronutrient groups will result in weight loss as satiety improves and energy expenditure increases.

This is why all of the following diets work for weight-loss in comparison to a “Standard American Diet” which specifies no restrictions on total calories, macronutrients, types of foods, or timing of eating:

In people with signs of glucose intolerance, a low-carbohydrate diet is extremely effective at eliminating cravings, improving satiety, and producing results in terms of weight-loss and overall feeling of well-being. There are many ways to formulate a low-carbohydrate diet. I prefer not to focus on specific diets, but rather to teach my clients broad nutrition concepts that they can use to adapt to future needs. Each of the diets above represents an underlying nutrition concept and corresponding tool that can be used by different people for different reasons at different times.

Here is what I wrote to my client:

Explanation: Your daily intake of carbs is currently around 150g/day.

Be generous with yourself and allow for mistakes and deviations – this is difficult and will take time to achieve.

Your fat intake is hovering around 60g/day. This can be increased to at least 110 grams if needed to allow you to feel satiated (full) while reducing carbohydrate intake.

Your protein intake has been around 80 grams. This can be reduced to 68 grams, but is less important to worry about at the moment.

Commentary: In retrospect, I wish I’d left out the advice regarding protein intake. Higher protein intake is likely to improve satiety and unlikely to contribute to weight gain or to prevent weight loss.

Continuation of the message to my client:

The reasons for these changes are: i) By reducing carbohydrate intake, you’ll improve your insulin sensitivity, decrease processed food consumption, decrease the reward-value of your diet, decrease cravings, decrease energy intake, and as a result, lose weight. ii) By tracking macronutrients, you’ll think carefully about your food choices which decreases mindless eating and teaches the nutritional value of different foods. iii) When you become more conscious of your nutrition choices, it’s easier to choose foods that you know contribute towards your long-term health versus those that detract from it.

Explanation: Many processed foods are often addicting. A few small snacks can add up to a lot of calories and make you reliant on rewarding flavor combinations of sugar, fat, salt, and carbs. Processing makes them highly available to the bloodstream without using any energy to digest or absorb the components you are eating. Eating whole foods instead will make a big difference in your feeling of fullness and will cause a natural decrease in energy intake. You’ll probably notice that you just feel better overall and that your digestion is improved too.

Based on your tracking, here are some suggestions of processed foods to avoid:

Replace those processed foods with:

Carbohydrates that you can include in your diet:

These instructions were sent and then discussed in person to make sure the plan was clear. This can be a lot of information to take in for someone who is new to nutrition. We communicated by text often.

After two weeks of this intervention, my client lost six pounds. Following these broad instructions alone, she lost a total of seventeen pounds in three months.

Exercise during this time period was sporadic and mostly recreational. We did work on implementing a 3-5x per week regimen of 5-15 minutes of air squats, kettle bell deadlifts, and modified push-ups. She also engaged in recreational activities like walking, hiking, and kayaking once or twice per week.

Repeat labs after three months revealed that her high-sensitivity C-reactive protein, a sensitive but non-specific marker of inflammation was cut in half from 5.1 to 2.6.

Her plantar fasciitis and wrist pain resolved. She reported feeling drastically better in terms of overall energy and mood.

By November, her weight was down to 165 pounds. We lost contact for several months as her schedule became busier, but in January we reconvened to repeat labs. Her weight was stable at 164 pounds.

In the following months, we made adjustments to macronutrient intake, experimented with time-restricted feeding and intermittent fasting, and improved her exercise program.

In my practice, we typically check labs roughly every six months as a matter of routine, but more frequently if needed. Our next lab check was done 15 months after our first intervention. My client’s weight was down to 160 pounds and had stabilized. Her nutrition interventions became regular eating habits. Her weight continued to decrease and her desire to exercise increased. I regret that we were unable to obtain a before and after measurement of body-composition using DEXA. I believe this would have revealed an even more dramatic loss of fat and increase in muscle than was demonstrated by weight-loss alone.

Here is a six-month graph of my client’s weight against a running average of energy consumption.

Here is a graph of metabolic markers followed by a corresponding graph of weight.

You can see how A1c, ALT, and CRP all came down while HDL went up as nutrition improved and excess fat was lost.

A stepwise approach of reducing energy dense and processed foods in favor of a nutrient dense whole food diet, adhered to roughly 80-90% of the time, resulted in a 35 pound weight loss over 16 months. Laboratory measures of metabolic health all improved markedly. In addition, my client reported improvements in several minor ailments, her energy level, and her overall sense of wellbeing.